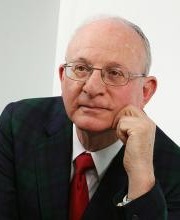 Sanford Budick  received his A.B. from Harvard College in 1963 and his Ph.D. from Yale University in 1966. Before being appointed Professor of English at The Hebrew University he was Professor of English at Cornell University. At The Hebrew University he served twice as chair of the English department, was a Fellow at the Institute for Advanced Studies, and was founding-director (1980-2000) of the Center for Literary Studies. He is the recipient of Guggenheim and NEH Fellowships. He has written books on Dryden, on eighteenth-century poetry, on Milton, on Kant’s relation to Milton, and on the Western theory of tradition. He has edited collections of essays with Geoffrey Hartman and Wolfgang Iser. With Wolfgang Iser he directed a three-year research project of the The German-Israeli Foundation for Scientific Research and Development on “The Institutions of Interpretation.” He is currently writing about Shakespeare’s plays, Wordsworth’s poetry, and Milton’s influence on Wordsworth.