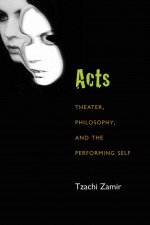 Why do people act? Why are other people drawn to watch them? How is acting as a performing art related to role-playing outside the theater? As the first philosophical study devoted to acting, Acts: Theater, Philosophy, and the Performing Self sheds light on some of the more evasive aspects of the acting experience— such as the import of the actor's voice, the ethical unease sometimes felt while embodying particular sequences, and the meaning of inspiration. Tzachi Zamir explores acting’s relationship to everyday role-playing through a surprising range of examples of “lived acting,” including pornography, masochism, and eating disorders. By unearthing the deeper mobilizing structures that underlie dissimilar forms of staged and non-staged role-playing, Acts offers a multi-layered meditation on the percolation from acting to life.